This delicate candy, specialty of Aix-en Provence, consists of a mixture of well-ground white almonds melted with selected candied fruits and home-made fruit syrup, placed on a thin wafer sheet, and covered with a bright white icing. Over the centuries, it has become the gastronomic emblem of the famous city Aix-en-Provence, where the painter Cézanne used to live in the late nineteenth century. To date, the calisson is still made in accordance with the ancient traditional recipe. Excellent at tea time and for gourmet buffets, it matches perfectly with coffee, sweet wines, black teas or even Japanese macha. 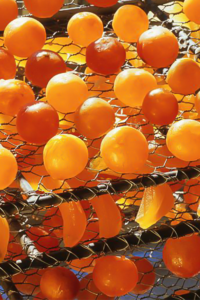 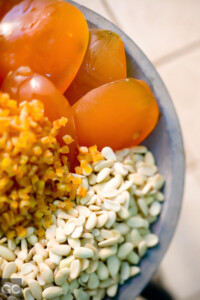 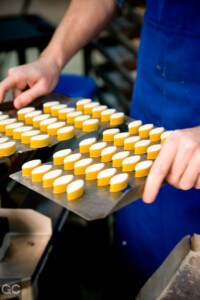 Its taste is a beautiful range of subtle flavors well-balanced of almond, orange and candied melon.
Calissons can either be given as a gift, a personal pleasure, or simply a pure moment of sweetness.
Calissons are also top of the traditional “13 desserts” eaten at Christmas in Provence. 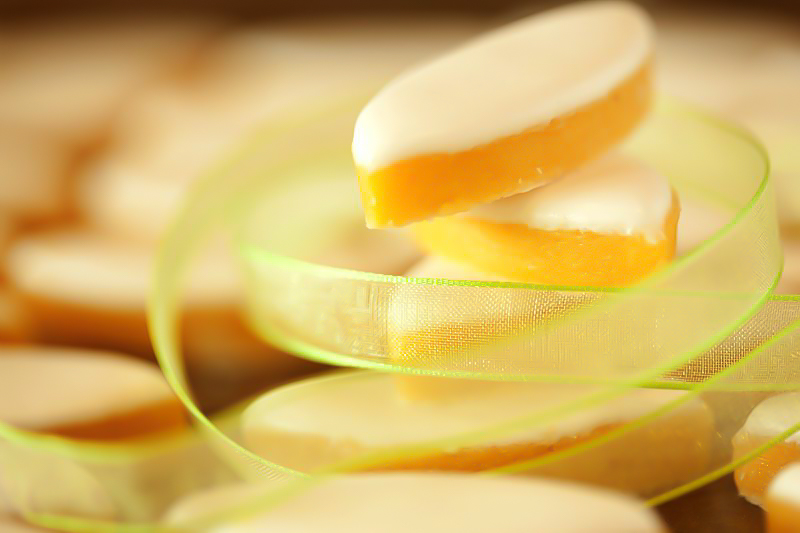 It is said that the modern form of calisson made its first appearance in 1473 at the wedding dinner celebrating King René’s marriage with Queen Jeanne. The head of the king’s confectionary served these sweet pastries to the Queen, the lozenges shaped like her eyes, and it is said that she smiled for the first time when she tasted them.
But for this pastry to become popular, we have to wait for the introduction of the almond tree to Provence in the 16th century. As almond production increased, the city of Aix-en-Provence became the world capital for the sale of almond pastries.
After the great plague of 1629, the heads of the city made a vow, still perpetuated every September 1st at Notre-Dame-de-la-Sed Cathedral, with the famous blessing of the Calissons. During the worship service, the Archbishop of Aix chanted the Latin “Venite ad Calicem” (Come to the Chalice), and the Provencals translated this to “Venes toui i calissoun”, or “Venez tous au Calisson” in French (Come, all, to Calisson). And the name stuck.

Therefore this religious festival is celebrated every year in Aix in September, called the “Blessing of Calissons”.
In the 19th century, the first calisson factories were set up, and by the beginning of the 20th century there were about 20 manufacturers in Aix. Today just one dozen remain, still making calissons in accordance to the antique recipe, perpetuating 4 centuries of tradition. 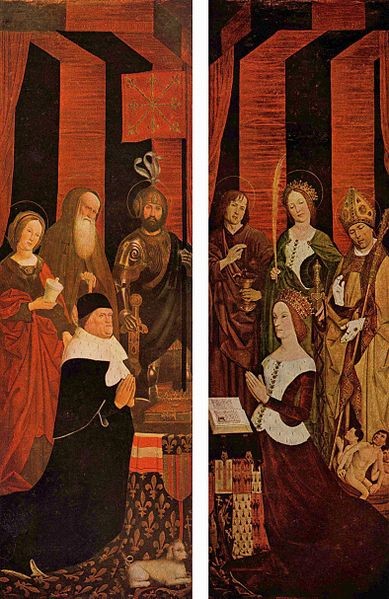 At the end of 18th and beginning 19th century, several families of candy men and pastry makers came from Switzerland to settle in Aix-en-Provence. One of them, Léonard Parli, decided to start his own business and opened a factory in 1874. He was a dynamic pioneer who chose to set up his facility in the new southern neighborhood, near the train station, beside the almond factory Brémond. This was a strategic place to ship its goods to big French cities such as Marseille, Lyon and Paris. The very making of calissons offered him a great opportunity. These delicacies are made of crushed almonds and candied fruits. The young Léonard understood the great advantage he could get from the candied syrups and the remnants of fruits he was producing. He specialized and succeeded! Pragmatic and creative, in 1875 he improved the machine to make calissons, enabling a fast and careful production while maintaining its quality. Productivity increased and by 1908, manufacturing reached 300 kg per day. Such capability of production at that time was like a dream! Later in 1910, he built a new factory, “designed to attract the eye and evoke a memory” (in his words). Today everyone is familiar with this elegant building which continues to delight local customers and tourists. That is the story of a Swiss candy man family in Aix.
The Gignoux family
Since May 2018, the Gignoux family has become the new enthusiastic owner of the Parli business, devoting themselves to promoting the historical know-how of the Parli family.

The talents
Our teams are our talents.
At Léonard Parli, it is the work of men and women that ensures the secret of our product’s quality…

The candy man
Candying consists in replacing the water in fruits with sugar, by an osmosis process. The fruits are dipped in a boiling syrup, then slowly cooled. The process is repeated 5 to 12 times. At each stage, the syrup is replaced with another of higher density. The process takes at least 1 month, and several dippings are required for certain types of fruits.

The calissoniers
The almond pastry preparer
First he drains slices of candied melon. At the same time, he rehydrates the pruned and whitened almonds in a pot of hot water. Then he crushes them with the candied melons and candied orange peels, first time with a teeth-like crusher, and second time between granite cylinders. Lastly, he warms the pastry in a kneader after adding a syrup of candied fruits previously prepared and cooks it in a pot. Finally, he beats the almond pastry manually to remove the air, then lets it rest for at least 48 hours. While typical industrial grinders crush the almond too much, releasing its fat and losing its flavour, at Léonard Parli, a traditional machine with big granit cylinders allows them to obtain a rich flavoured, granulated pastry.

The icing preparer
He mixes the egg white with sugar in a three bladed blender. The worker has to adjust his recipe so that the icing is not too thick nor too smooth.
The calissons shaper
People are always impressed by the calisson machine because of the magic of its molds. Two shapers are in charge of it: one for the icing, and another to offload the calissons. The first person inserts a wafer sheet under the tray containing the calisson-shaped molds. The machine fills the molds with the almond pastry. After this he manually applies the icing. The machine then pushes the calissons up out of their molds, though still connected at the bottom. Then the other person carefully uses “combs” to remove and put them on trays. They are baked in an oven, where the icing is set and the calissons are given their final aspect. Finally, after cooling, they are offloaded onto trays before being packaged.

The packager
His qualities: he has to be precise, fast and meticulous. After cooling, the calissons are quickly sorted and manually packaged one by one, like all other Léonard Parli products, thus enabling better quality control. The calissons are arranged in their boxes like grains of wheat. An interlayer sheet is placed between each layer of calissons.